It is important to have a basic understanding of anatomy or what our pelvis actually looks like. Following is some basic definitions of the magnificent female pelvis! 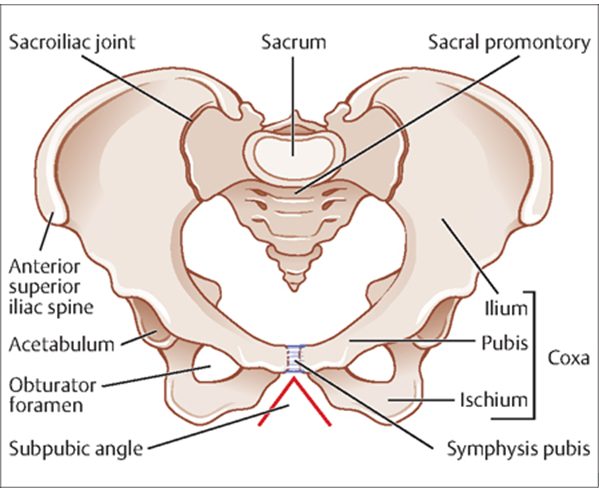 ‘THE BONY PELVIS  –  The pelvis forms a bony canal through which the baby must pass during the process of birth, and if the canal is of average shape and dimensions the baby of normal size will negotiate it without difficulty.

PELVIC BONES  –  The pelvis is composed of four bones:  two innomiate or hip bones at the sides and in front, the sacrum and coccyx behind.

PELVIC JOINTS  –  two sacro-iliac, the symphysis pubis and the sacro-coccygeal.  In the non-pregnant state there is very little movement in these joints, but during pregnancy a certain amount of softening and stretching of the ligaments takes place, probably due to endocrine activity, which results in slight separation of the joints.

PELVIC LIGAMENTS  –  The function of ligaments is to bind bones together, and the ligaments binding the sacrum and ilium at the sacro-iliac joint are the strongest in the whole body.

THE FALSE PELVIS  –  The bony pelvis is divided into two parts, the false and the true.  The false pelvis is that part above the brim and consists mainly of the flared-out iliac bones.  It has little obstetrical importance.

THE TRUE PELVIS  –  The true pelvis is the curved bony canal through which the baby must pass during birth.  It consists of a brim, cavity and outlet.

THE FOUR BASIC TYPES OF PELVIS

Pelvises vary in size and shape and have been classified into four parent groups, according to the shape of the brim.

The Gynaecoid pelvis, is best suited for child-bearing.  The brim is round.  The cavity is shallow, with a broad well-curved sacrum. 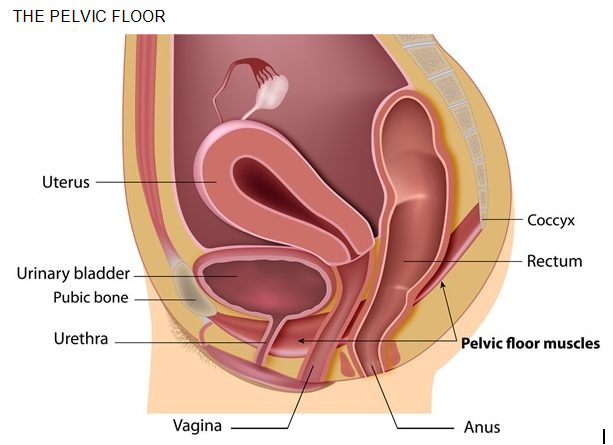 The pelvic floor muscles are under enormous strain during pregnancy and have to stretch to allow the birth of baby.  Weak pelvic floor muscles can lead to problems of bladder and bowel control, allow pelvic organs to sag (prolapse) and reduce sexual pleasure.  Strengthening exercises are therefore very important both before and after birth.  Signs of weak pelvic floor muscles include stress incontinence (leaking of urine when coughing, sneezing or laughing, inability to keep a tampon in place and vaginal flatulence.  One in three women who have a baby develop some degree of incontinence. 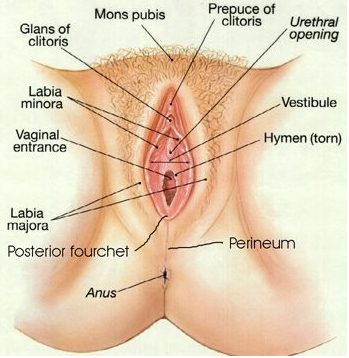 THE VULVA  –  The labia majora, or greater lips, are two elongated masses of areolar tissue and fat, covered with skin on their outer surfaces.  They arise anteriorly in the mons veneris-a pad of fat lying over the symphysis pubis:  posteriorly they merge into the perineum;  the round ligaments of the uterus are inserted into their anterior portion.

THE LABIA MINORA are two thin folds of skin, lying between the inner surfaces of the labia majora.  Posteriorly they fuse and form a thin fold of skin known as the fourchette, or anterior edge of the perineum.  In front, the labia minora unite and enclose the clitoris, one fold passing under that structure, the other passing over it like a hood to form the prepuce of the clitoris.

THE CLITORIS, a rudimentary organ, analogous to the penis in the male, is a sensitive, highly vascular structure, situated about 2.5cm. above the external urethral orifice.

THE PERINEUM  –  is the area extending from the end of the vagina to the beginning of the anus, and forms the base of the perineal body – a triangular mass of connective tissue, muscle and fat, measuring 3.8cm.x3.8cm.  The perineal body fills the wedge-shaped area between the lower ends of the rectum and vagina, and forms a central attachment for the muscles and fascia of the pelvic floor.

THE VAGINA  –  The vagina is a canal extending from the vestibule to the cervix.  The posterior wall is 7.6-10.2cm. long and the anterior wall is 5.1-7.6cm., being 2.5cm. shorter because the cervix enters its upper third.  The uterus therefore lies almost at right angles to the vagina. 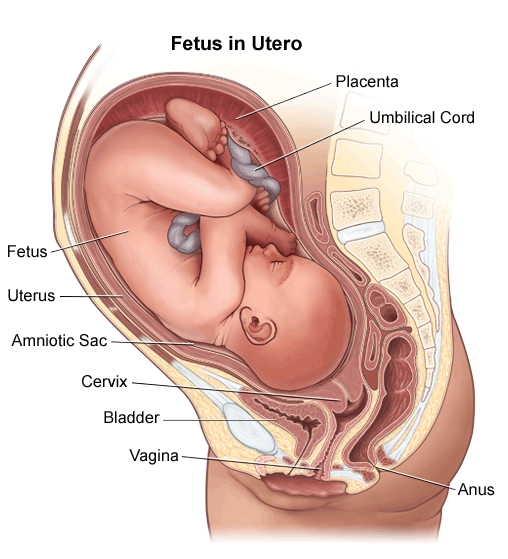 THE UTERUS  –  The uterus, a hollow muscular organ shaped like a flattened pear, is situated in the cavity of the true pelvis, behind the bladder and in front of the rectum.  In it the fertilized ovum embeds, is nourished and protected for 40 weeks.

POSITION OF THE UTERUS  –  The uterus lies in a position which is almost horizontal when a woman stands erect.  It leans forwards, and this position is known as ante-version.  It bends forwards on itself, producing ante-flexion, with the fundus resting on the bladder.

THE CERVIX  –  The cervix or neck is the lowest part of the uterus and the vaginal portion projects into the vault of the vagina.  The cervical canal is 2.5cm. long, and the constricted area where the cervix and isthmus meet forms what is known as the internal os (mouth);  the external os is a small round opening at the lowest point of the uterus, but after childbirth it is a transverse slit.  In structure the cervix differs from the body of the uterus, containing less muscular and more elastic tissue.  Lining the canal is mucous membrane, with glands which secrete alkaline mucous.

Back to
Login
Accessing this course requires a login. Please enter your credentials below!
Lost Your Password?