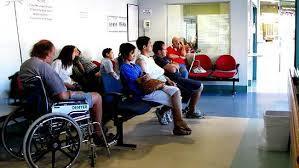 LABOUR IN A HOSPITAL WAITING ROOM! It was 11p.m. on a Thurs. evening when we headed down to Nepean Hospital. My client had been in and out of labour for a few days so was very pleased that she had finally settled into normal labour and was looking forward to meeting her baby. She had, of course, practised the Inside Birth hypnosis techniques, so was well prepared. Her partner had rung ahead to inform the hospital of our imminent arrival.

We were ushered into the Delivery Suite waiting room, where there were 4 other labouring couples with ‘various’ support people in attendance. Jenny (not her real name) decided that she could not get into her ‘zone’ in this environment so camped outside, on the floor, resting against the ‘fire escape’ door among other’s luggage bags etc. It did cross my mind that if there was a fire, it would not be possible to escape through this particular fire exit! We stayed there for about 3 hrs. with the other couples, in different stages of labour. They were very busy but, on behalf of Jenny and her partner, I pushed (pardon the pun!) for her to get the next available room. She has a very sad obstetric history, with several losses, and really needed to be in her own room, to find her own space. About 1 hr. later we got into a room. Finally! I started to set up the room for her and pulled back a curtain, only to find another labouring woman in a bed! we had been put in a 2 bedded room. The only toilet available to the other couples still in the waiting room, was in the room where these 2 couples were, so there was a constant queue of ‘visitors’ lined up to use the one and only toilet!

Following more discussion with various midwives, and much ‘polite insistence’ Jenny finally got her own room at 6.30a.m. the following morning and she birthed beautifully at 10a.m. There were still others in the waiting room from the night before!

Of course these labour’s are not going to ‘progress’ in that environment. Bright lights, sharing with strangers, being very self conscious, no access to shower, bath etc. all contributes to slow labour and in most cases, labour stopping.

What can be done? What should be done? In my 40yrs experience I haven’t seen this problem. Hopefully it does not happen very often, but public hospitals must have a back-up plan for this scenario. In the year 2014, in a major city, and a major teaching hospital, this should not happen. Love to know your thoughts.